There are a wide variety of climates throughout the continent of Tamriel. In Skyrim province the city of Riften is largely surrounded by forest typical to temperate climates. This climate is defined as a climate between the polar and tropical climates that tend to flank it on the north and south respectively. A temperate climate is milder than either and often times has 4 distinct seasons with little or no extremes in weather. Below is an image of Riften in the early autumn.
The climate of Bruma (see image below) in the province of Cyrodiil has an altogether different climate. Because of its altitude as well as its location as the northernmost city in the province, it is covered with snow year round. This city lies within the polar climate of the continent which can be defined by perpetual snow and ice coverage year round.
Moving from a polar climate to a tropical climate predominated by swamps, marshes and mangrove trees. The city of Murkwood in the Black Marsh province consists of all three as demonstrated in the image below.

Another area of Tamriel that demonstrates similar swamps and marshes is the southern reaches of Morrowind; specifically the city of Seyda Neen (see below).
One final climate zone on the continent of Tamriel is the desert climate.There are few areas as dry or as barren as the Alik'r Desert (below) in the western reaches of Hammerfell province. Several cities ring the desert as they lie upon the shores of Illiac Bay or the Abecean Sea, but from the edge of the city to the edge of the Dragontail Mountains, there is no significant moisture to be had.
Overall, the continent of Tamriel is hospitable, with most cities and towns thriving in temperate, tropical or subtropical climates.

Posted by Unknown at 4:08 PM No comments:

The Hydrology of Tamriel

In the image above, one can see that the continent of Tamriel is surrounded by water and is also permeated by numerous rivers and streams. These hydrologic (water) features are important not only for the supply of potable water to the provinces of Tamriel but also serve as means of commerce for sea-faring vessels that are engaged in inter-provincial trade. The greatest majority of the river systems are concentrated in the Argonian Province in the southeast of Tamriel.


The above image is of the Argonian Province, also named Black Marsh for its swamps and marshes. The river system is distributary in nature meaning that the rivers distribute water outwardly from the primary drainage system or river. A drainage system is defined as any area where water accumulates and drains from that area. 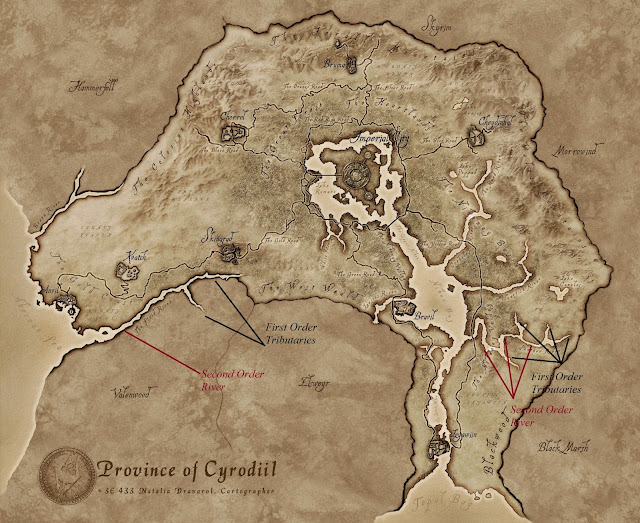 This image of the Province of Cyrodiil (pictured above) shows a dendritic drainage system. A dendritic system orders tributaries that feed the drainage basin on a hierarchical scale from least to greatest. Two of the same order in the hierarchy must converge to form the next higher order, for instance two second order streams merge to create a third order river. It should be noted to the east of the map there is a segment of a second order river that is fed by a first order tributary. Where two differing magnitudes of order confluence (meet) the highest order remains by default.


The map of Hammerfell above once again shows a distributary river system, this time originating from Karnver Falls and then distributing outward onto the plains to the north and east.

In this map of Solstheim, the most important hydrologic feature is the Mortrag Glacier (northwest corner of the island). This glacier represents approximately two percent of the fresh water supply for all of Tamriel; the rest comes from rivers and streams.
Posted by Unknown at 2:45 PM No comments:

Tamriel, on the Planet Nirn, "is the most well-known and important continent on the planet” (http://elderscrolls.wikia.com/wiki/Tamriel). The continent exhibits numerous tectonic features, not the least of which is the enormous volcano in Morrowind, Red Mountain (Figure 1).
The eruption of Red Mountain in the early years of the 4th era all but obliterated the island of Vvardenfell, of which the volcano makes up nearly two-thirds of the whole. In the DEM (figure 2) one can see the extent of the lava flow from the top of Red Mountain. The volcano continues to spew forth ash into the air. Pahoehoe, which long since cooled “are often used as roads” by the folks in Morrowind (http://elderscrolls.wikia.com/wiki/Red_Mountain). Vvardenfell remains a wasteland and the land to both “north and east of the mountain is arid and barely habitable” (http://elderscrolls.wikia.com/wiki/Red_Mountain).


To the east of Morrowind lies the province of Skyrim. The province is dominated by mountains throughout with some flat plains to the west-central portion of the province. These mountains have been created along faults within the crust of the “earth”. Faulting appears to be the culprit insomuch as the mountains along all three continental borders exhibit linear scarps that run parallel to the face of the mountains. However Throat of the World, the tallest mountain in all Tamriel (http://elderscrolls.wikia.com/wiki/High_Hrothgar) stands alone from the rest of the mountain ranges and holds its own unique tectonic story. It too is a result of faulting but it juts out and away from the predominant east-west scarp to which it may be a part. It is identifiable as a scarp because of the triangular facets that radiate out from the mountain on the northeast and southeast sides. The mountains to the west appear to be the result of slip-strike faulting with right lateral movement as indicated by the abrupt change in the flow of the river running along the otherwise straight line fault scarp (Figure 3).

Welcome to the Geography of Tamriel blog site. I am Steve and I will be hosting this site for the duration of your geographic exploration into the continent of Tamriel.

For those who may not be familiar with the continent of Tamriel, it is the site of the Elder Scrolls Series of video games. I myself am not a "gamer" so this should prove to be a challenge. I selected Tamriel because it is fictitious yet contains insurmountable amounts of geological data that is revealed throughout the game. From rivers and streams to mountains and valleys, the geologic landscape is as diverse as the North American continent, if not more so. Oh...and here there be dragons!
Posted by Unknown at 3:16 AM No comments: